How to Understand Your Body’s Messages Part 6 (of 6): The Immune System

How to Understand Your Body’s Messages Part 6 (of 6): The Immune System

How to Understand Your Body’s Messages Part 5 (of 6): The Digestive System

How to Understand Your Body’s Messages Part 5 (of 6): The Digestive System 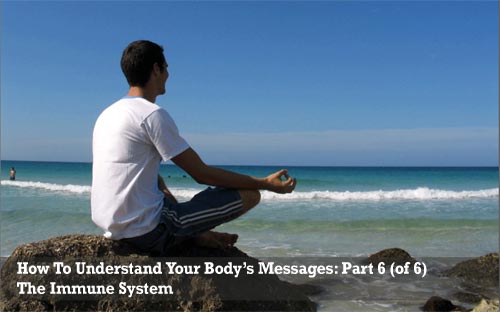 We accomplish N-number of things in a day. And it has always been the ‘Important tasks’ that we deal with at the first place. Many of you work in an organisation or study in an institution and therefore, are accustomed of working with important things to cope up with. Now watch me out as I tell you, how on the same lines, the Immune system of our body copes up with the most important work of the human system – its defence against viral and bacterial invaders.

If you are one of those who always have a running nose, or at least an explosion in the mucus of the nose every second month of the year or if fever envelopes you with its heat often, then you’re the kind who has always been ignorant of the most important trait that protects all the systems of our body – The Immune System.

Pull out a chair and read on to learn how to protect your immune system and maintain it for a healthier and disease free life.

The immune system isn’t just your first line of defense against viral and bacterial invaders; it even battles the inflammatory processes that lead to heart disease. It’s a fact of life that as we grow older, the immune system works less efficiently[1], leaving us more open to infections and disease processes. Allergies and arthritis are two common results of an overactive or misdirected immune system.

If you’re functioning, so is your immune system. But if you get more than six respiratory, sinus, or ear infections a year, it means that something may be wrong. Ask your doctor for a white-blood-cell count. It can tell whether your soldiers are holding their own on the front lines.

If you laugh a lot or have a wide social network—you frequently attend cultural events, see a lot of your family, or practice any sort of religion—you’re statistically less likely to become sick. The connection is stress as stress causes a release of brain chemicals that actually depresses the immune system[2]. Laughter, friendship, a belief system and such things work to combat stress as they’ve all been linked to stronger immune function.

Get the right amount of sex

A study from Wilkes University in Pennsylvania shows that sex can strengthen immunity. Of ill men and women quizzed on their sexual habits, those who reported having sex once or twice a week had levels of immunoglobulin A antibodies (immune system cells that form the body’s first line of defense against intruders) that were one-third higher than those of either their less active or more active counterparts.

Doctors prescribe antibiotics to an estimated 51 percent of all patients who walk in with the sniffles. The problem is that taking antibiotics could unnecessarily suppress your immune system, making you more likely to develop resistant bacteria or to become sick in the future. Unless your cold has progressed to a bacterial infection like bronchitis or pneumonia, antibiotics aren’t recommended[3]. Tell your doctor you’d prefer not to take them unless it’s absolutely necessary.

As by the end of this series, you are entitled to be knowledgeable of the entirety of the Human Body Systems. Since now that you understand stuff, its time to practice. Yoga is a holistic therapy for the entire human body system and the good part is that we will help you choose the Yoga that is right for you.