How to Understand Your Body’s Messages Part 4 (of 6): The Nervous System

How to Understand Your Body’s Messages Part 4 (of 6): The Nervous System 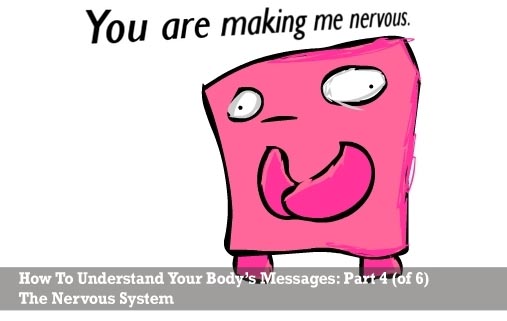 We wake up, we pee, we flush, we brush, we get ready, we’re steady, we eat, we preen, we drive, we travel, we work, we think, we execute, we strive, we eat again, we talk, we argue, we’re calm, we walk, we fall ill, we recuperate, we rejuvenate, we laugh, we cough, we love, we care, we hate, we envy, we eat again and we sleep. Right from chopping our nails to delivering a world class presentation, we do everything. But we do not stop because of the unstoppable ‘our brain’ – and thanks to it that it does not cease to work even when we do.

All the numerous neurons that have been running to and fro in our nerves like the blue collar workers and have been serving our power of sight, sense, smell, hear and taste ever since our inception. Its so much important to take care of them because it can be dangerous if they are not looked after well.

Scan through what follows beneath, explaining every thing you need to know about the Nervous System check and its maintenance for a long life.

According to a study from Boston University, the average 65-year-old man has an 11 percent chance of losing a chunk of his brain capacity if he lives at least 20 years more. So its important to know how it’s most likely to break down in order to keep your nervous system in check:

If you make it to 85, there’s a chance you won’t remember a thing. Nearly 50 percent of people 85 or older have this degenerative brain disease to some degree[1]. Alzheimer’s Disease is studied to be stretched to genetic and hereditary affects also.[2]

Stroke occurs when there’s a rupture or blockage of one of the arteries feeding the brain. It’s the equivalent of having a heart attack, and it’s the number three killer of Americans and the number one cause of serious disability.[3]

Of course, growing old isn’t the only way to lose your nervous system. You can also physically damage it—something that more than a million americans do each year. (FYI, 8 out of 10 spinal cord injuries occur in men.)

It’s tough to spot your own troubles in this system, because it’s easy to dismiss some of the key symptoms, such as headache, dizziness, weakness, or forgetfulness. The only way to tell whether the cause is neurological is to see your doctor.

People with higher levels of education, who are likely to have challenged their brains more throughout life, tend to get Alzheimer’s disease later than those who leave school earlier. I don’t know whether that’s a good reason to go on for a graduate degree if you don’t want one, but it does suggest that using your brain may help prevent dementia[4]. Do a puzzle, learn the Gaelic alphabet, or at least switch from ESPN to the History Channel every once in a while. Just keep those neurons firing.

Have a glass of wine

A 16-year Danish study of more than 13,000 people found that those who drank one to six glasses of wine per week had a 34 percent lower risk of stroke than those who rarely drank[5]. After Alzheimer’s disease, it’s vascular dementia—essentially small, asymptomatic strokes that cumulatively cause brain damage—that’s the most common cause of cognitive impairment.

Vitamins E and C have been linked to decreased rates of Alzheimer’s disease[6], and vitamins B6, B12, and folate are believed to fight vascular diseases[7] that can interfere with the brain’s blood supply. Doctors recommends 1,000 IU of E, 1,000 milligrams of C, and a B-complex multivitamin every day.

Two-thirds of all sports-related spinal cord injuries come from diving into pools. Eighty-seven per-cent occur in backyard pools, 46 percent occur during parties, and almost half involve alcohol. Never dive into water less than 8 feet deep, and stay out altogether if you’ve been drinking.

I’m sure by now many of you might have even started to considered getting higher education just as a precautionary action against the Alzheimer’s disease. 😀

Now, release the anxiety to sink in some digestive facts about human body that are coming up in the next edition of this series: ‘How to Understand Your Body’s Messages’ Part 5 (of 6): The Digestive System’.

And of course, you will never forget to reciprocate our goodwill with your tweets. (Please please please tweet it for me.)