How to Understand Your Body’s Messages Part 2 (of 6): The Respiratory System

How to Understand Your Body’s Messages Part 2 (of 6): The Respiratory System

After acknowledging what all is to be known for having a better life with a skeletal check in first part of this series and followed by a healthy respiratory system in the second part, now its time to move on to feel the beats of your heart in the third part.

Human heart is by far the most important element of the human body system. The intensity of emotional imbalance that we may give to it could result in a pain unparalleled one. Heart aches when a beloved dupes, heart aches when we lose and heart aches when its life is at stake. We’re hurt when we’re ignored but how about the heart that feels everything for you? How’d it feel when you ignore it? Anyways, emotional imbalances are bound to be, but the physical ones can be diagnosed at an early stage and cured.

Read on to know the basics of human heart system check and its maintenance plan to lead a happier, healthier and definitely longer life. 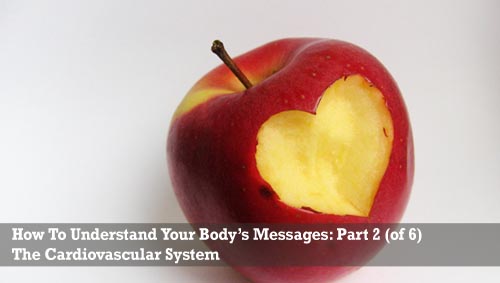 Heart disease is still the single biggest man-killer in the United States[1]. Lowering your risk isn’t just about low-fat meals and exercise. Little things can make a difference too. So knowing how it’s most likely to break down can help us keep heart ailments at check :

About 1.1 million Americans have heart attacks each year [2]; one-third don’t survive. In a typical attack, a blockage in a coronary artery cuts off the supply of oxygen and causes the death of heart tissue.

An additional 4.6 million Americans are cursed with hearts so weak that even modest physical exertion causes shortness of breath and exhaustion.

1. Have your cholesterol checked at least every 5 years (every year if you need to bring it under control); and have your blood pressure checked every 2 years.

2. Be alert for symptoms that could indicate heart trouble. Discomfort in the chest, especially after physical exertion, may be your first clue that something is going wrong. It can take the form of pressure, burning, or a squeezing sensation; may radiate into the arms; and is often accompanied by shortness of breath, fainting, sweating, or nausea. Also, keep in mind that one in three heart attack patients have no symptoms.

The most common time to have a heart attack is first thing Monday morning[3]. Mondays and the end of the workweek are also peak times for dangerous disturbances in heart rhythm. It’s not just the stress of going to work that’s a trigger, it’s the stress of a change in routine.

In other words, putting all your energy into your work, or trying to cram all your relaxing into just 2 days a week, could be a dangerous practice. But more important to your heart than stress itself is how you respond to it. Responding angrily or bitterly to the point where your heart rate and blood pressure goes up is far more worse than simply being frustrated.

Learn to control your re-action, and your heart is less likely to self-destruct.

Snack on nuts, not chips

A 12-year study of more than 22,000 men found that those who ate a lot of nuts were less likely to die of heart disease[4]. And a separate study of nearly 800 French people found that walnuts are particularly good[5] subjects who consumed a lot of walnuts (and walnut oil) had higher levels of heart-healthy HDL (“good”) cholesterol in their bloodstreams.

So, did that pump in a high dose of knowledge circulating in the veins of your brains? We’re sure it did but then, they say ‘More is always Less’ for those who want to make the most of their brain, therefore, stay tuned for next part in the series about the Nervous System.