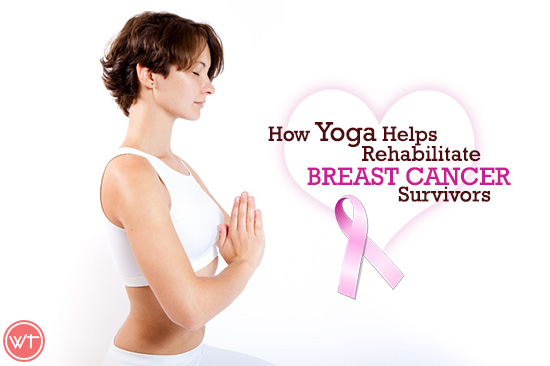 One may survive cancer, but the demons of fatigue and inflammation haunt for the rest of the patient’s life. The less you do physically, the less you are able to do. Its like a downward spiral. Having witnessed my aunt fight with breast cancer for seven years, and then, lose in the end, had turned me all the more determined towards this deadly disease.

I now, take better care of myself and my family, and always keep an open ear for any related news, and on-going researches.

One such study I came across today, is in my field of interest – Yoga. I have always believed yoga can be a cure to almost any kind of problem. Even if it can not heal you physically sometimes, it’ll give you mental strength and courage to put up a tough fight. It seems now, health professionals and researchers are finally acknowledging this fact too.

The study suggests out of all components of yoga that include stretching, strengthening, meditation and breath work, the last two are of highest importance and possess a great ability to deliver monumental results in very less time.

Read true account of a woman who battled with breast cancer wearing her Yoga armour and came out victorious: Beat Breast Cancer with Yoga – Interview with Kathryn Livingston

A study in oncology led by Janice Kiecolt-Glaser, a professor of psychiatry and psychology at The Ohio State University in Columbus, has shown substantial decrease in fatigue and inflammation through modest practice of Hatha Yoga in breast cancer survivors.[1]

It is by far the biggest randomized controlled trial done with all biological measures, which brought together 200 women aged 27 to 76. These women had undergone chemo- and radiation therapy between 2 months and 3 years before the trial, and were randomly assigned to either intervention or control group.

As a precautionary measure, it was ensured none of these women had done yoga previously.

The trial went for 3 months, where the intervention group participated in 90-minute of yoga twice every week. The control group during this time were asked not to do it and, both were monitored closely for signs of progress.

Inflammation and fatigue were gauged medically

Inflammation levels were gauged by measuring presence and levels of pro-inflammatory cytokines or protein markers of inflammation in blood. The levels of fatigue and depression were assessed by a series of questionnaires and talk sessions.

The yoga group did not show any reduction in weight, but gave drastic results in terms of symptoms of fatigue and inflammation.

Key Yoga takeaways for us