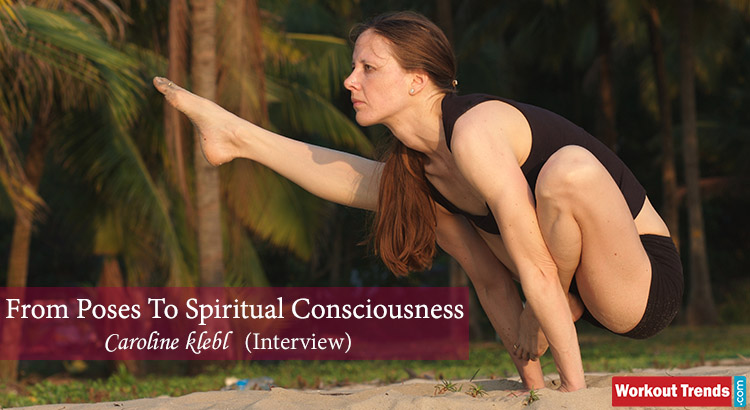 From adventurous snow boarder to hot vegetarian chef to skeptical Ashtangi and now a blissful yoga instructor, in our Livin’ Life The Yoga Way – Interview Series, Caroline Klebl came across as an ideal example of how following your heart can make you explore unimaginable horizons.

During her learning process, she felt Pattabhi Jois‘s approach to yoga was materialistic. Let’s find out what made her change her perspective:

What is your preferred yoga style and how has it transformed you?

Caroline: Ashtanga Vinyasa Yoga is a dynamic style of Asana practice, that quickly builds strength and increases flexibility. It strengthens the cardiovascular system, by emphasizing deep breathing during the asanas and the transitions between the asanas. It reduces stress, detoxifies the body and strengthens the body, mind and sense organs. It has improved my strength and flexibility. It has eliminated knee pains, improved my posture, increased my energy levels, reduced stress, improved my mood and mental functions.

What motivated you to take up yoga?

Caroline: When I first learned about Yoga and Meditation, I was interested in attaining to higher states of consciousness. When I learned from my Yoga teacher, Pattabhi Jois in India, I thought that his emphasis on the asana practice was materialistic. I later realized that the path to consciousness can only be traveled by means of physical poses.

So, how did you overcome it?

Caroline: Just kept on going with my faith. My teacher, a world renowned Yoga teacher, he emphasized that Yoga was 99% practice and 1% theory. He taught hundreds of Yoga postures and emphasized the Yoga Asana practice above meditation or Yoga Philosophy. The Ashtanga practice is very physical, but the changes that take place in the body are accompanied by changes taking place in the Prana, or subtle energy underlying the physical form, the chakras as well as in the mind.

After practicing Ashtanga Yoga for several years, I noticed the subtle shifts in consciousness that had taken place and recognized the Yoga asana practice as having the ability to bring about the insight and attainment to higher states of consciousness that I had originally set out to experience.

Tell us how it contributed to your personal growth in these areas or anyone else you witnessed.

Caroline: Yoga practice purifies the subtle energy channels that underlying the physical form. It stimulates the chakras (energy centers) and thereby raises consciousness. By improving the mental functions and maintaining a content emotional state the practitioner of Yoga is able to make positive advances and changes in their career path and relationships.

My personal experience of becoming a Yoga Instructor was inspired by practicing Yoga. One day after practicing Yoga in India, I felt an opening and deep feeling of connection within my heart. I felt the inspiration to teach Yoga and share this incredible experience with others.

Tell us something about your yoga practice.

Caroline: I practice Yoga Asana 4-6 days a week. I usually practice at home or on a porch or deck. Occasionally I’ve practiced a few postures in a park, forest or on the beach. It is advised not to practice Yoga in direct sunlight and a flat surface is required for the Vinyasa (movements between the postures) and the Yoga postures, therefore it is difficult to practice outside. I have trained over 450 Yoga teachers, who teach Yoga all over the world.

Caroline Klebl conducts Yoga Teacher Training Programs and retreats in Los Angeles and in beautiful tropical retreat destinations around the world. With a background in Tibetan Buddhism, Iyengar and Viniyoga, she practices and teaches Ashtanga Yoga. She studied traditional Ayurveda and Pancha Karma, Sanskrit and Yoga Philosophy in South India. She received a PhD in Yoga from the Indian University of Alternative Medicine.

from Amazon, which are great sources of learning Ashtanga yoga, the easiest way.