You know that choking feeling you get when you’re going through a bad breakup, big grief or depression?

Two voices run through your mind.

One voice tells you that you’ve got to be emotionally and mentally strong, learn to worry less and keep your mental balance in any adversary. Meanwhile, other voice calls you a loser that pushes you towards negativity and depression.

It was the end of first quarter of 2018 when the stress and trauma of my divorce started to catch up on me. I started doubting myself as a person. I looked at my divorce papers like a failed report card, a proof that I could never have a normal relationship.

I used to cry in the corners where no one could see me. And slowly, I had built around myself an invisible wall to shield myself from any heart-breaks in the future.

Fast forward to today, everything has changed. I am no longer dwelling in the past. I’m happier, healthier, mentally stronger and more successful.

Want to know how I turned it around?
Using “Online Therapy”!

Understanding Worry (And How It Works)

Worry is an immensely powerful psychological mechanism. And it works both ways.

Low levels of worry can drive one into a positive problem solving mode. While beyond a threshold point, worry can lead to excessive stress causing mental illness.

Worry manifests in two forms: Internal, as in depression and anxiety, and external, in form of drug abuse and anti-social behavior.

A third form is often observed, when stress becomes too much to take in, and the person creates an altogether different realm of parallel world where things are either absolutely perfect or profoundly grim.

This form of psychosis with its salient symptoms is clubbed under the umbrella of schizophrenia.

How To Handle Stress Better And Worry Less?

If there’s an issue in your life that’s causing you distress, it’s better to deal with it sooner than later. You tend to perform better and reach your full potential when you’re not in freak-out mode.

Over time, even minor unrest can bloom into a disaster. Therefore, the earlier you go to therapy and engage in introspection, the better off you are in the long run.

In another study, it has been found that we worry less as we grow older (beyond 60 years). So basically, we drain ourselves with worry, the most in our youth.

Hence, we should avoid thinking about the past and focus more on the present moment to make the most of it.

How to boost your mood, build resilience and increase happiness?

1. Harness the power of Green to boost your mood

A recent study (probably more relevant for urban planners) says that, people who moved/lived in urban areas laced with green spaces reported sound mental health even 3 years after the move.

The study conducted by University of Exeter Medical School[1] and published in the journal Environmental Science & Technology, concluded this after tracking 1,064 people over a 5-year period. The mental health quotient was calculated based on their responses to a General Health Questionnaire, which examined them for mental health disorders (such as depression and anxiety), as well as general moods and feelings.

This takes us to the age old myth of walking barefoot on green grass in morning. The myth now has a scientific back. In a twisted way of course!

Now, how can we incorporate green in our daily lives.

Worry is nothing but anxiety of the outcome. People building mental images of all sorts of things that could go wrong in a particular situation. According to psychologists, they actually have a problem dealing with the distracting thoughts as they find it difficult to distinguish between a problem-solving thought and a nagging worry that has no benefit. Good news is, such unproductive worries can be tamed if you train your mind some ‘mindfulness.’

Mindfulness is nothing but ‘awareness of present.’ This mindfulness, as I said, can be programmed in your brain through practice, or regular exercise.

Researchers from Johns Hopkins University have listed 47 trials out of nearly 19,000 meditation studies that addressed anxiety issues and have come to conclude that mindfulness meditation can help [3] ease psychological stresses like anxiety, depression, and pain.

This is actually to resist one’s temptation to over-analyze a situation. It forms a part of Cognitive behavioral theory, which has been found to be beneficial not just in cases of generalized anxiety disorder but has proven its efficacy in severe paranoia too.

2. Friends are priceless and the source of happiness!

A recent study conducted by Medical Research Council seems to have given men a perfect excuse to sneak out to bar and share a pint [2]. The study aimed at exploring the Drinking ­Attitudes in Midlife, enquired men who drank in groups in the pub, about their drinking habits.

The conclusions, though quite surprising are totally comprehensible. Men, who are generally stereotyped as strong and silent, and after a few drinks open up to their emotions. They then express themselves in ways which are a far cry from what is termed as masculine. And hence, the mental peace from letting out stagnant emotions.

Our takeaway from the study is, meeting up with friends and chilling out can be the anti-depressant pill you have been searching.

Cognitive Behavioral Theory (CBT) is based on the idea that problems aren’t caused by situations themselves, but by how we interpret them in our thoughts. These can then affect our feelings and actions. 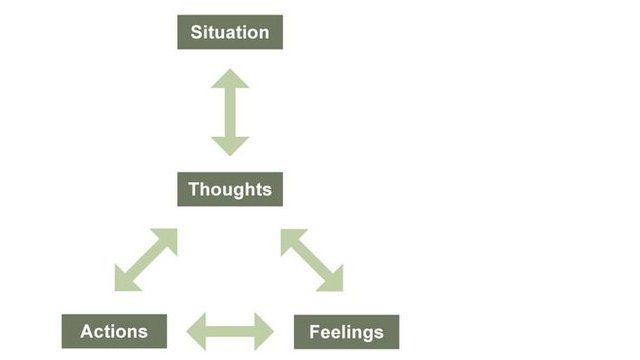 People have this belief that worrying or continuously anticipating the outcome is actually helping them. CBT helps them re-evaluate any such beliefs.

CBT teaches you to confine worrying to a regular set period of 15 minutes or so each day. When worrying negative thoughts arise at other times, CBT tries to identify unhelpful ways of reacting that creep into our thinking.

Of all the therapies, CBT has the most clinical evidence to show that it works. CBT has proven to be as effective as medication for many types of depression and anxiety disorder in many Studies with lesser to no side effects and long-term benefits.

Later, I had few telephonic call sessions as well during the course of my online therapy with Betterhelp. After assessing my condition, the tele-health therapist coached me on my path to recovery.

I hope you found my experience useful. Practice the above 3 ways I have shared and tap into your inner peace to build better mental health for yourself.